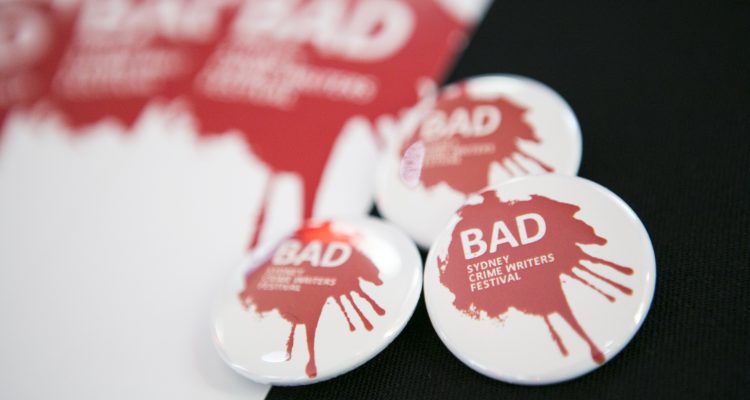 Thank you for attending BAD: Sydney Crime Writers Festival back in September. We’ve had a great response and plan to do it again next year. Lots of people have asked us to produce an occasional newsletter, so here’s our first go.

In each issue we’ll have a despatch from the front line by one of our speakers. Here Caroline Overington reports –

I have delivered the manuscript for The Ones You Trust to my editors and publishers at HarperCollins, and we are at that stage of the process where we are basically arguing about everything: should we change the title? Do we like the cover? Is the blue sufficiently blue? Will it stand out on the book shelves? But not just design, also plot points: How much can a child that age talk? Would a child that age talk to a stranger? Would they go with a stranger? Is the person who took the child an actual stranger, or only a stranger to her? Or not a stranger at all? How tall is a child of that age? Could she be easily carried? Would she allow herself to be carried? How long would police wait before sending out an Amber Alert? What if one of the parents was famous? How much blame would the mother get? How much blame would the father get? Do we hear enough from the detective? Do we hear too much from the detective? What happened to this character? Where did that character go?

It’s my favourite part of the process, because it makes writing a book feel more collaborative and less lonely compared to all the time you sit in front of your screen fretting. Because you really want your readers to love it! I have readers who can’t wait for the next book. They run out and buy it or download it the day it comes out. And I want them to say: Ahhh! It’s better than the last one!! Which can’t always happen. But this time, I think we’ve done well.

We can hardly wait! Meanwhile, Denis Tracey has been reading two psychological thrillers and reckons –

Shari Lapena’s The Couple Next Door opens brilliantly. A young couple, Anne and Marco, have a birthday dinner with their neighbours, leaving their six-month old baby at home alone – the babysitter cancelled at the last minute – but they have a baby monitor and they go back to check on her every 30 minutes.

Surely nothing could go wrong? But of course it does. The ending is excellent.

Fiona Barton’s debut, The Widow, was a Sunday Times and New York Times bestseller and has been published in thirty-five countries. Jean was married to Glen who worked in a bank, until he had to leave after that nasty misunderstanding with the computer. Then he was charged with a truly horrible crime, but the police stuffed up the trial and he was acquitted. And now he’s been run over by a bus and killed. But DI Bob Sparks is convinced he was guilty and can’t let the case go. Reviewers often say ‘I read it in one sitting’. It took me two.We are hopeful that Barton and Lapena will be guests at BAD18.

Michael Duffy has been reading The Darkening Age by Catherine Nixey, the story of the crimes Christians committed against non-believers once Christianity became the official religion of the Roman Empire.

Early Christians grossly exaggerated the number of their fellow-believers who’d been martyred, as a successful PR exercise, and proceeded to ransack and tear down the Roman temples, and in some cases to murder those who failed to convert. They were particularly down on the Roman philosophers whose secular, humanist beliefs sound close to those held by many people in Australia today. Classical literature was largely wiped out, and Hypatia of Alexandria, one of the most important female intellectuals in history, was torn to pieces by a Christian mob in 415 AD. Now that’s a crime …

Finally, from BAD17 you can listen to Gratuitous Sex and Violence; Sue Turnbull speaks with critic and actor Graeme Blundell and film-maker Peter Gawler about crime on screen: