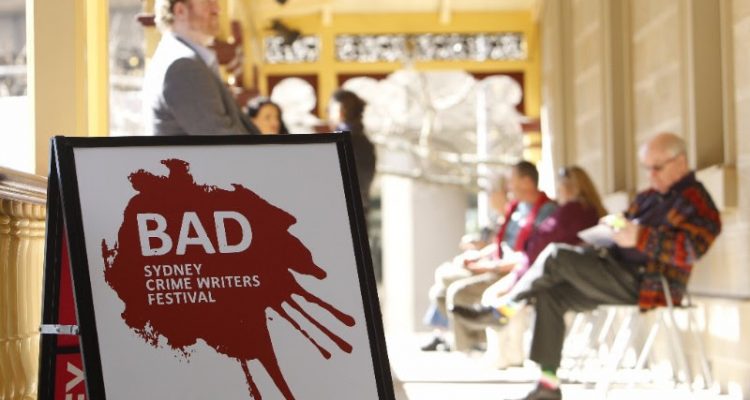 Welcome to BADNews#2, the newsletter of the Sydney Crime Writers Festival.  We’re busy developing the program for BAD2018. Ideas and suggestions are welcome. In the meantime, here are some thoughts.

And you might like to put a red line through 1-2 September 2018, for the second festival to be held at the Justice & Police Museum.

Mark Morri, the Daily Telegraph’s Crime Editor and a star of BAD17, provides an exclusive on his next book. It sounds like the sort of true crime story that could make novels unnecessary.

The case of a parcel bomb sent to a Sydney Penthouse pet in 1998 was one of the more unusual and sexy crime stories I have seen in this city. Her boyfriend, male model and nightclub doorman Brett Boyd, picked up the package addressed to Simone Cheung and it exploded in his face, blinding him in one eye and blowing off his right thumb. Boyd’s friend and Fox TV presenter Roberto De Heredia was charged with the bombing, but faked his death and fled the country until he was arrested 17 years later in England and brought back to Sydney.

By chance I knew some of the players involved in the original case, including one of the detectives and a drinking companion accused but cleared of making the bomb. The backdrop to much of the book is Sydney post-Wood Royal Commission, with crooked cops and major drug dealers all but gone, and control of Kings Cross up for grabs. The major characters are up and coming TV stars, strippers, nightclub workers and gangsters. The book will be published later this year after the trial of Roberto de Heredia in May, following a hung jury last year.

We asked Jack Heath, author of the sensationally gory Hangman, to tell us about his work in progress. It’s scary.

I’m finding the sequel to Hangman unsettling to write. Hopefully it will be unsettling to read, too. But every scene comes with a reminder of how much I’ve changed.

In January of 2008 I was twenty-one. I had published two young adult novels and written a third. I felt like I was ready to try my hand at crime fiction for adults, which had been my preferred genre to read since my early teens. My approach to writing has always been “Go big or go home”, so I picked the most violent, over-the-top premise I could think of: the FBI recruits a brilliant cannibal as a consultant, and gives him a cadaver every time he solves a case. Then I started writing Hangman.

The first draft was finished in 2010, but wasn’t published until 2018. By that time I’d quit several jobs, gotten married, visited eleven countries, lost two grandparents and become a father. I’d published twenty books in several genres for various audiences, and each new story had taught me something I didn’t know.

Now Hangman is a bestseller, and I’m supposed to write Book Two. I have to get back into the disturbed head of Timothy Blake, my perpetually hungry anti-hero. At first it was frighteningly easy. The outline was a cinch, since I’d learned so much about plotting in the interim. And when I started to write, I was relieved to find Blake’s voice—equal parts Sherlock Holmes, T-Bag from Prison Break and Rorschach from Watchmen—still there, waiting for me.

But then I got to chapter two. The plot depended on Blake doing something truly repulsive—though no worse than anything he had done in Hangman. And it was hard. I found myself wanting to write around the event, to avoid saying the actual words. To somehow write the scene without actually picturing it, or thinking about it.

Because some things get less scary as you get older. Marriage, parenting, getting a job, talking to strangers. But other things only get more frightening, because your ability to empathise has improved, and your understanding of the world has expanded. You know someone who has been murdered, or raped, or gone to prison. It’s no longer theoretical.

I wonder if I still have the stomach for this. But now I’ve started writing, and Blake is back. It doesn’t matter what I think. He’s not going to let me stop.

And finally, Denis Tracey is impressed by the latest from Messrs Connelly and Child.

Is it a coincidence that Lee Child’s latest Jack Reacher story (The Midnight Line) and Michael Connelly’s latest Harry Bosch (Two Kinds of Truth) both deal with America’s opioid epidemic? Maybe not; perhaps there’s a network where Michael calls Lee and says, ‘Hey this opioid business is getting pretty serious. Let’s put Harry and Jack on the case’. It’s an appealing thought; there are a quite a few aspects of modern American life that would benefit from some Jack Reacher pragmatism.

The first Jack Reacher book (The Killing Floor) came out in 1997, and by now Reacher must be getting a bit middle-aged. But he remains the archetypical American hero, the laconic man who rides into town, sorts out the baddies, makes love to the heroine and then rides off again. In this book he seems somehow a bit gentler, but still well able to deal with a gang of bikies at a bar.

Harry Bosch is older too, and having really fallen out with his bosses at the LAPD is working as a volunteer at a small police department. In Two Kinds of Truth he teams up with his half-brother, Mickey Haller, the Lincoln lawyer. He’s being investigated over an old conviction and now two pharmacists, father and son, have been murdered during an apparent holdup.

Each of these books is the 22nd in its series, and displays the taut writing and narrative dexterity that have made Child and Connolly such stars of crime fiction.